Home Environment The Countries With The Highest Emissions Over History

The world has emitted over 1.5 trillion tonnes of carbon dioxide (CO2) since the year 1751, according to the estimates of Our World in Data.

According to the United Nations, given the current rate of emission as well as the concentration of greenhouse gas emissions in the atmosphere, the world is bound to exceed the 1.5 °C goal by the end of the century if major institutional and technological changes will not be executed.

Given this, which countries have emitted the highest emission levels across history? Let’s find out.

As we can see above in the historical graph of the annual share of CO2 emissions, China wasn’t always the top emitter of carbon throughout history. Initially, it was the United Kingdom which occupied the spot of being the top emitter, until it was overtaken by the United States in 1888. It was only in 2006 when China became the top emission contributor in the world.

From what we have seen in the graph above, the top emission contributors at the present-day are not necessarily the top contributors in the past. Even if that is the case, previous emissions persist in the atmosphere and will continue to have detrimental effects in the succeeding years.

Knowing this, apart from simply looking at who is the top emission contributor today, it is equally important to check which countries are the largest contributors when their annual contributions are summed over history. 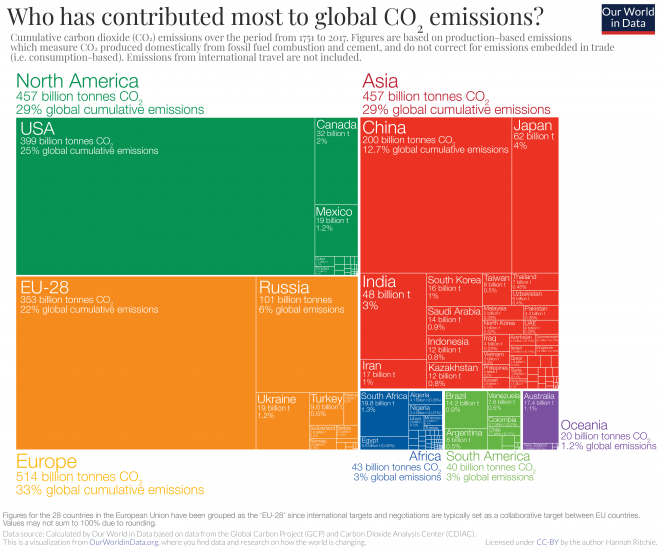 By doing this, Our World in Data came up with the visualisation above. As we can see, it is the United States who has, cumulatively speaking, contributed the most CO2 emissions, with an estimate of 25% of the global cumulative emissions (since 1751) attributable to the country.

China, the current highest contributor, on the other hand, accounts for 12.7% of the global cumulative emissions.

The United States, together with EU-28, and China account for 80% of all the carbon emissions emitted throughout history.

With all of these in mind, policies should take into account both the present-day emissions and the cumulative emissions of the countries in international agreements.

Indeed, countries that are currently emitting large amounts of emissions should have the obligation to contribute more in reducing the annual global emissions. However, countries which have contributed greatly in the past should also be given this same accountability.