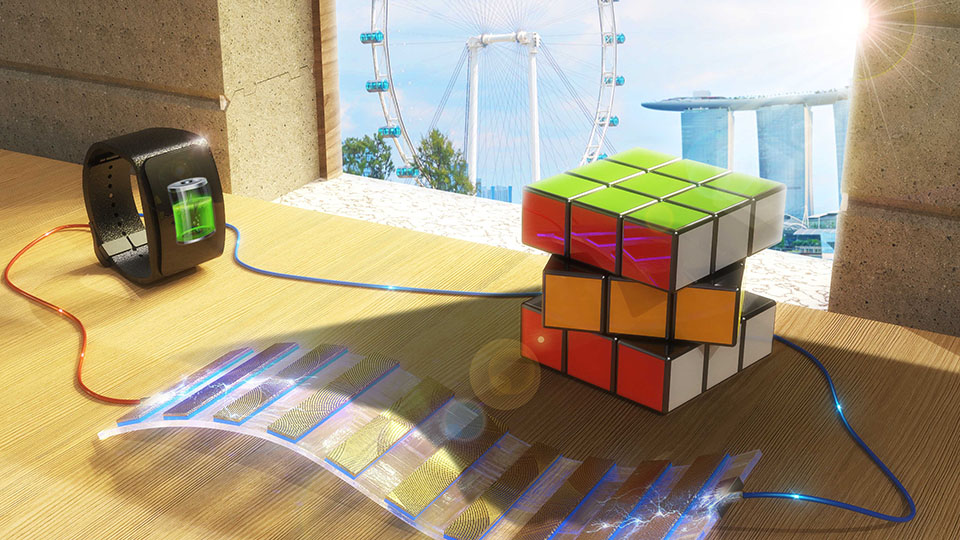 Shadows are often associated with darkness and uncertainty. Now, NUS researchers are giving shadows a positive spin by demonstrating a way to harness this common but often overlooked optical effect to generate electricity. This novel concept opens up new approaches in generating green energy under indoor lighting conditions to power electronics.

A team from NUS Materials Science and Engineering as well as NUS Physics created a device called a shadow-effect energy generator (SEG), which makes use of the contrast in illumination between lit and shadowed areas to generate electricity. Their research breakthrough was reported in the scientific journal Energy & Environmental Science on 15 April 2020.

“Shadows are omnipresent, and we often take them for granted. In conventional photovoltaic or optoelectronic applications where a steady source of light is used to power devices, the presence of shadows is undesirable, since it degrades the performance of devices. In this work, we capitalised on the illumination contrast caused by shadows as an indirect source of power. The contrast in illumination induces a voltage difference between the shadow and illuminated sections, resulting in an electric current. This novel concept of harvesting energy in the presence of shadows is unprecedented,” explained research team leader Assistant Professor Tan Swee Ching, who is from NUS Materials Science and Engineering.

Mobile electronic devices such as smart phones, smart glasses and e-watches require efficient and continuous power supply. As these devices are worn both indoors and outdoors, wearable power sources that could harness ambient light can potentially improve the versatility of these devices. While commercially available solar cells can perform this role in an outdoor environment, their energy harvesting efficiency drops significantly under indoor conditions where shadows are persistent. This new approach to scavenge energy from both illumination and shadows associated with low light intensities to maximise the efficiency of energy harvesting is both exciting and timely.

To address this technological challenge, the NUS team developed a low-cost, easy-to-fabricate SEG to perform two functions: (1) to convert illumination contrast from partial shadows castings into electricity, and (2) to serve as a self-powered proximity sensor to monitor passing objects.

The SEG comprises a set of SEG cells arranged on a flexible and transparent plastic film. Each SEG cell is a thin film of gold deposited on a silicon wafer. Carefully designed, the SEG can be fabricated at a lower cost compared to commercial silicon solar cells. The team then conducted experiments to test the performance of the SEG in generating electricity and as a self-powered sensor.

“When the whole SEG cell is under illumination or in shadow, the amount of electricity generated is very low or none at all. When a part of the SEG cell is illuminated, a significant electrical output is detected. We also found that the optimum surface area for electricity generation is when half of the SEG cell is illuminated and the other half in shadow, as this gives enough area for charge generation and collection respectively,” said co-team leader Professor Andrew Wee, who is from NUS Physics.

Based on laboratory experiments, the team’s four-cell SEG is twice as efficient when compared with commercial silicon solar cells, under the effect of shifting shadows. The harvested energy from the SEG in the presence of shadows created under indoor lighting conditions is sufficient to power a digital watch (i.e. 1.2 V).

In addition, the team also showed that the SEG can serve as a self-powered sensor for monitoring moving objects. When an object passes by the SEG, it casts an intermittent shadow on the device and triggers the sensor to record the presence and movement of the object.

Towards lower cost and more functionalities

The six-member team took four months to conceptualise, develop and perfect the performance of the device. In the next phase of research, the NUS team will experiment with other materials, besides gold, to reduce the cost of the SEG.

The NUS researchers are also looking at developing self-powered sensors with versatile functionalities, as well as wearable SEGs attached to clothing to harvest energy during normal daily activities. Another promising area of research is the development of low-cost SEG panels for efficient harvesting of energy from indoor lighting.

As Wind And Solar Energy Grow, So Do Their Challenges

How Do Electric Vehicles Work?

If Energy Becomes Free In The Future, How Will That Affect Our Lives?