Home News Why Palladium Has Been Rising On Global Commodities Markets 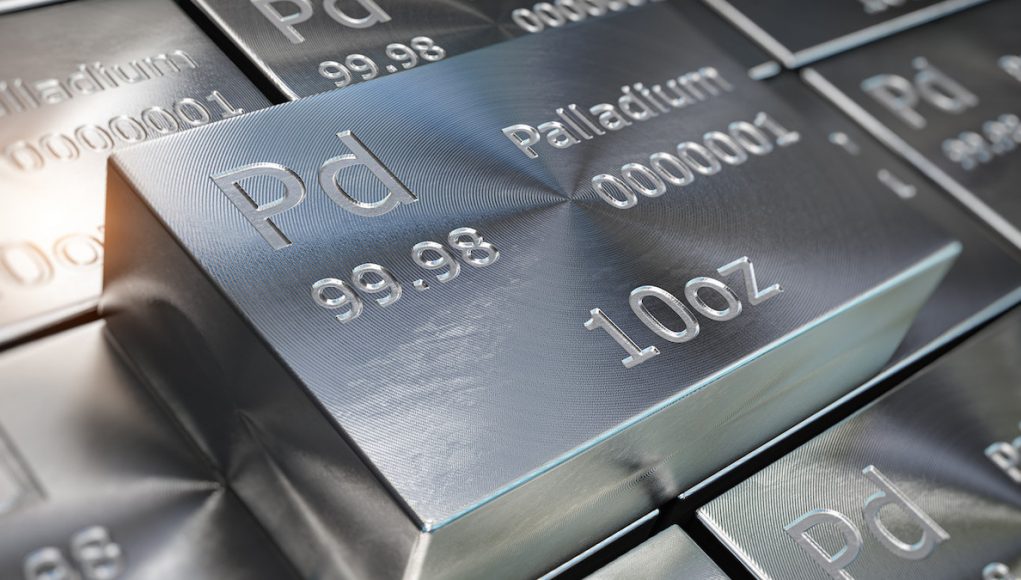 Last year, the price of palladium, a precious metal 30 times as rare as gold, rose by more than 50% since, surpassing the price of gold for the first time since 200, as the price of 1 ounce of palladium topped $1,400, while platinum dipped under $800, and gold hovered just above $1,300. Skip forward to January of 2020 and the price of palladium jumped by more than 25%… almost doubling its value in 2019. Its price was, according to the BBC: “… at about $2,500 (£1,922) an ounce of palladium is more expensive than gold, and the pressures forcing its price up are unlikely to ease anytime soon.” Palladium’s key commercial use is as a critical component in catalytic converters – a part of a car’s exhaust system that controls emissions – found mainly in gas and hybrid vehicles. The vast majority of palladium, more than 80%, is used in these devices that turn toxic gases, such as carbon monoxide, and nitrogen dioxide, into less harmful nitrogen, carbon dioxide, and water vapor. Its becoming so valuable that, as the BBC stated, London’s Metropolitan police said the number of thefts in the first six months of 2019 were more than 70% higher than the whole of the previous year.   Active stocks in the markets this week include Canadian Palladium Resources Inc. (OTCQB: DCNNF) (CSE: BULL), Tesla, Inc. (NASDAQ: TSLA), Lithium Americas Corp. (NYSE: LAC) (TSX: LAC), Albermarie Corporation (NYSE: ALB), Nikola Corporation (NASDAQ: NKLA).

It appears that demand will continue to be higher than the supply for the near future, as it has done in the last several years. The BBC article added: “As a secondary product of platinum and nickel extraction, miners have less flexibility to increase palladium output in response to rising prices… And that shortfall looks set to continue, with South Africa, which produces around 40% of the world’s supply, last week saying its output of platinum group metals, including palladium, fell… compared to a year earlier. Meanwhile, demand for palladium from car makers has increased sharply for a number of reasons.   Around the world governments, notably China, are tightening regulations as they attempt to tackle air pollution from petrol vehicles.”

These intervals are preliminary results that do not include rhodium (Rh).  At East Bull, Rh is a significant contributor to the Palladium-equivalent (Pd-eq) grade along with platinum (Pt), copper (Cu), gold (Au), nickel (Ni) and cobalt (Co).  In addition, hole EB20-20 has not been completely sampled.  Results will be updated when additional results have been received.

Mr. Garry Clark, Director, commented, “Canadian Palladium is pleased with these drill results that show significant widths of “contact-type” palladium mineralization extending down dip from the current 523,000 oz PdEq Mineral Resource.  The Deposit dips north from surface at approximately 45o and presents a favourable orientation for a pit-constrained Mineral Resource.  Mineralization is open at depth and along strike.  We look forward to releasing more results from our on-going drill program.”

Palladium exploration targets at the East Bull Project include:

Additionally, there is discovery potential for structurally controlled “conduit-type” targets that may vertically extensive. Read this entire release including full drilling results for the Canadian Palladium news at:  https://www.financialnewsmedia.com/news-bull/

Other recent developments in the markets include:

Tesla, Inc. (NASDAQ: TSLA) announced that the Board of Directors has approved and declared a five-for-one split of Tesla’s common stock in the form of a stock dividend to make stock ownership more accessible to employees and investors. Each stockholder of record on August 21, 2020 will receive a dividend of four additional shares of common stock for each then-held share, to be distributed after close of trading on August 28, 2020. Trading will begin on a stock split-adjusted basis on August 31, 2020.

“In 2019, we took great care to identify a different approach to how we look at sustainability and how it fits into our overall business strategy,” said Kent Masters, Albemarle CEO. “We conducted a materiality assessment with key stakeholders to gather insights into topics that matter most for the execution of our strategy and creation of long-term value for our partners. The findings are reflected in our new sustainability framework. As we look ahead, we shift our focus from setting our baseline sustainability performance to continuous improvement to continue creating sustainable value for our communities, customers and stakeholders around the world.”

Lithium Americas Corp. (NYSE: LAC) (TSX: LAC) has recently reported financial and operating results for the second quarter ended June 30, 2020.  This news release should be read in conjunction with Lithium Americas’ unaudited condensed consolidated interim financial statements and management’s discussion and analysis (“MD&A”) for the six months ended June 30, 2020, which are available on the Company’s website and SEDAR.  All amounts are in U.S. dollars unless otherwise indicated.

“We remain focused on protecting our workers and communities, while coordinating closely with the Province of Jujuy to ensure we operate responsibly and safely as we begin to restart construction activities over the next few weeks,” said Jon Evans, President and CEO of Lithium Americas. “I would like to personally thank all of our workers in Argentina for their commitment and recognize the significant contribution they continue to make to the success of the project for the benefit of all stakeholders.”

“With respect to the Thacker Pass lithium project in Nevada, we continue to make significant progress with the recent release of the draft Environmental Impact Statement by the Bureau of Land Management.”

Nikola Corporation (NASDAQ: NKLA), a global leader in zero-emission and infrastructure solutions, recently announced a minimum order of 2,500 electrified refuse trucks from Republic Services, expandable up to 5,000. This order is to begin full production deliveries in 2023 with on-road testing likely to begin in early 2022. The refuse trucks are anticipated to carry up to an industry-leading 720kWh of energy storage.

“Nikola specializes in heavy-duty, zero-emission Class 8 trucks. The refuse market is one of the most stable markets in the industry and provides long-term shareholder value,” said Nikola Founder and Executive Chairman Trevor Milton. “The Nikola Tre powertrain is ideal for the refuse market as it shares and uses the same batteries, controls, inverters and e-axle. By sharing the Tre platform, we can drive the cost down for both programs by using the same parts. You couldn’t pick a better partner than Republic Services, a leader in long-term environmental sustainability and customer service. Republic Services will help us ensure the Nikola Tre meets customer and fleet lifecycle demands and we are excited to have them participate in the design process.”

Where Will The World’s Next Giant Gold Discovery Be Made